How I Got Into Google With No Tech Background, Part One

This is Part 1 of a series on how I got into Google as a first generation college grad with no tech background and almost no connections.

In my post Why You’re Absolutely NOT Underqualified To Work At Google, I promised to share how the hell this first generation college grad got into Google with no tech background (and virtually no contacts.)

Well let not your heart be troubled, because today is Part 1 of the story as best I can recall it.

This is how I got into Google after getting rejected by them 5x as a cold applicant coming in through the front door.

And I think, along the way, you’re going to see how some of the twists and turns apply to your own job search.

Because the truth is, whether your target is Google, Facebook, Microsoft, Amazon, Apple, or another top company…

The game is played at a different level than what you’re used to.

The top tech firms are a major step up from the way all other companies approach recruiting, hiring, negotiation, compensation, and promotions.

I’m going to get into the nitty-gritty of how I navigated the hiring process in future installments of this series.

Today I want to start by sharing WHY I chose to apply at Google.

And what blew me away after I got in the door.

It was 2011 and I had been working at American Express for more than five years.

It was honestly a pretty good job. I was a director making $125K / year, with a predictable workload, and more or less total job security.

If you were a fresh college grad, you might have looked at me and said “shit, I’ll take that!”

So I’m not going to pretend I was miserable or stuck in some dead-end job that I hated.

At the same time, I was frustrated by the slow pace and the below-market compensation.

Every year, during annual employee surveys, employees said: “We like the work-life balance, the culture, the prestige…but the pay sucks.”

But I was hungry for a new career adventure.

As grateful as I was for what I had, I knew I was capable of more.

I didn’t want to do the same old stuff every day. I wanted to work on exciting projects. I wanted to be creatively and intellectually challenged.

And I’m not ashamed to admit it: I wanted to make a lot more money.

Google stood out as a sexy, high-growth company where I could level up.

They had ball pits. You could wear jeans and t-shirts to work. They even let you bring your dogs to work.

Google built (and still builds) amazing products that millions of people use. Their focus on strong product designs and creating tons of utility for people really inspired me. They also paid well.

In my eyes they were the cream of the crop.

In fact, I had applied to Google five or six times before, and all I got were canned response rejections. Or often, no response at all.

(I only know the date because Google’s calendar search feature is so amazing that I was able to easily pull it up.)

I was grabbing drinks with an old college buddy named Seth in downtown Manhattan, complaining about my challenges pivoting into tech.

Seth knew I wanted to work at Google, and somewhere between our third and fourth beers, he said: “Hey, I know a guy named Ben who you should talk to. He’s a Director there. We play in the same temple softball league. Want me to introduce you?”

I said yes, Ben and I exchanged some emails, and two weeks later we had a phone call.

He actually interrupted his family vacation in Hawaii to call me late in the evening NY time.

Ben was a super nice guy. He didn’t know me from a hole in the wall, but he took time out of his vacation to give me some good insight about Google.

He also liked my background, and told me about a couple different roles at Google that I might be interested in.

A few months later –– on Monday, May 11th –– I started my job at Google in their NYC office.

Don’t worry: I’m going to cover the details of the interviews and the negotiations and all of that soon. 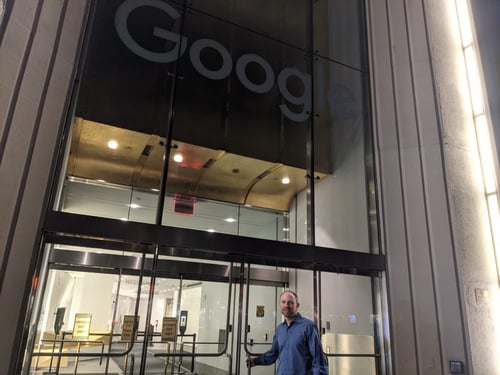 For now, suffice it to say that I will NEVER forget my first day as a Googler.

Right away, I knew I was in the big leagues. I was put in charge of a 14 person global team (the largest I’d ever led) that included managers.

The responsibility and trust that Google put into me as a leader –– on day one –– eclipsed all five years at American Express.

Google’s building in New York is the old Port Authority building. It was at the time the second-largest building in all of NYC, and it actually has an elevator lift that used to carry buses.

When Google moved in, they brought an ice cream truck in through that lift, hauled it up to the 11th floor, and served ice cream, homemade froyo, fresh-baked cookies, and tons of other food to employees. 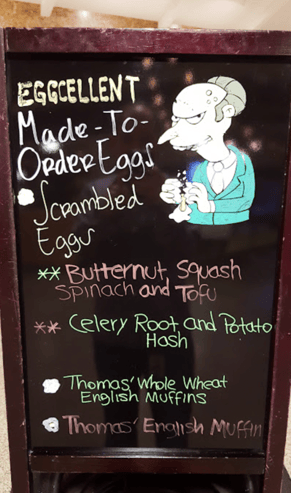 There were also cappuccino bars, coffee bars, even free classes where baristas would teach you to make the perfect cup of coffee.

(I never took lessons myself. I just ordered from the many bars around the office.)

And let me tell you about the drool-worthy lobster mac and cheese!

I had never heard of lobster mac and cheese before, but it became my favorite meal. They gave you big chunks of lobster with ooey-gooey cheese that I can still taste when I close my eyes and think about it.

Now maybe you don’t care what food they serve at your job, but it wasn’t even really about “the food.”

What I took away from it was how much Google cared about creating an atmosphere where people felt valued and supported.

Everything about my first day screamed: “this is NOT your regular old workplace.”

Which became even clearer after I updated my LinkedIn profile.

Overnight, my inbox flooded with kudos, congratulations, and tons of people saying: “Alan, how the hell did you get to Google? Bring me along!”

(Needless to say, that incoming barrage did not happen when I got hired at American Express.)

Over my six year career at Google, I wound up getting nine people hired –– which is a really high number.

In comparison, Ben, a super-connected guy, managed to only successfully refer one person to Google –– me –– in ten years!

In fact, my success at getting people into Google is part of why I started Kadima Careers.

Look –– getting hired at Google wasn’t ALL rainbows and butterflies.

In one of my upcoming posts, you’ll hear how I screwed up the salary negotiation and left at least $100K on the table. (Above and beyond the $62K bump that I did get.)

Still, it would be impossible to exaggerate what a huge difference it made in my life.

And if you’re willing to put in the work, you can land a killer job at your dream company too.

Look out for Part 2, where I “rewind the tape” and take you through my first phone call with Google’s recruiter.

Let us know what you think